Authentic Greek salad, also known as Horiatiki or Greek village salad is made with cucumber, tomatoes, green pepper, red onion, Kalamata olives, feta, thyme, olive oil and vinegar. This post was originally published on August 12, 2013 and updated on May 9, 2020.

I grew up spending my summers in Greece. My mom, a professor, would take us to visit our family. We’d spend weeks in a small village on the island of Kefalonia, on the west side of Greece.

It’s not the white and blue houses you see on postcards, but instead, it’s a luscious green island with yellow and white sandy beaches and pastel coloured houses with terracotta roofs. Ours was a bright, sunshiney yellow.

Every meal starts with a Horitatiki, the Greek village salad. It comes with no dressing–there is olive oil and vinegar on the table for you to dress as you please. A big hunk of feta on top. I am happy eating an entire plate to myself for lunch.

What is Greek cuisine?

Greek cuisine is a quintessentially Mediterranean style of cooking. It leans on incredibly fresh and delicious produce, fish and meat, cooked in a way that highlights each ingredient. With Middle Eastern, Ottoman and Italian influences, there are lots of bright herbs, and of course, olive oil.

My style of cooking is very much influenced by my Mediterranean background, it’s where I feel most comfortable in the kitchen.

So much so that the first story I developed for Chatelaine was a Greek mezze platter.

Since you’re here, I figure you must be interested in some Greek recipes. Chicken souvlaki and homemade tzatziki would round out this Greek salad perfectly.

What is the key to good homemade Greek salad?

Honestly, fresh vegetables make the biggest difference. Use the most local vegetables that you can get your hands on. Use a good quality extra virgin olive oil, this is where you want to use your more expensive “finishing oil”.

Always add more acid than you think. I like to use white wine vinegar, but red wine vinegar will work as well. It brightens everything up.

Dried thyme or oregano are key to a traditional Greek salad. Thyme is my favourite; but either works. Rub it between your fingers to release the aromatic oils before sprinkling overtop of your salad. 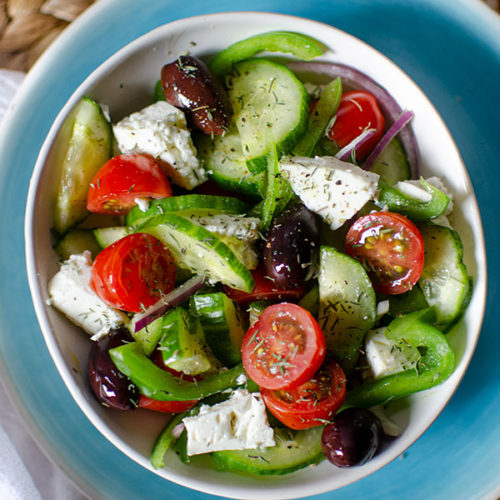 This Authentic Greek Salad is one of my favourite sides to pair with burgers or anything grilled!